skip to main | skip to sidebar

Into the Sunset and Suchlike

We started on the same point — on ‘hundred see-see-ez.’ The Enfield Bullet 350 was always the final stage in biking, the Yezdi, being an iron curtain collaboration (Czech via Jawa) was in the doldrums.

The Yamaha RD350 was introduced much earlier to stand besides the Bullet 350 but was more than my fellow country men could handle in terms of power, was more than the mechanics could handle in terms of tuning a high-performance two stroke. (Too much theory and physics and numbers in it, compared to four-stroke power tuning, where one can at least change cams. 2 strokes, conversely need porting and reboring, besides individually tuned expansion chamber exhausts.) . Too expensive for regular riding, as compared to scooters which ruled the mainstream market and finally too fast for our roads.
There was a Yezdi 350cc too, once.

Back then, the ultimate machine soon became a Yamaha RX100; and we all hoped like crazy to get one before we passed out of college. Some friends happened to own RXs, although I wasn’t one of the lucky ones, I learnt on the RX and have spent some petrified moments pillion while my friend negotiated slipstreams generated by trucks, on the highway. I ended up getting my first job, marketing on a Yezdi Classic, that my brother borrowed from a friend when he was in town.

Six months later, the bike was taken back, I was out of my first job, standing in a crowded bus, headed in the wrong way, since I was confused about bus routes, with a ghostly feeling between my thighs. I didn’t know it then, but I had also developed a liking for the handlebar position, which never required you to bend your elbows!

I cast around and bought a 1976 Model 'B' for the paltry sum of Rs. 2,200. Add 2,000 to get it on opened once and put together again and I was on the road with my very own iron horse. It was no performer, as I found out painfully in the following years/kms, but I had learnt that no one wanted to sell a Yezdi. Till date, there are countless of these proud bikes parked in garrages, in parking lots, under staircases rotting, but their owners cannot bear to part with them.

The old Premier Padmini that got washed religiously every Sunday morning, was sold off, but a Yez hardly took as much space, I guess. My own bike, I got my hands on, because the dude was an army doctor and was posted in the gulf. He told me he did not want to sell it as he and his wife had gone and got married in court on the bike itself. Since I was a family friend, he guessed the bike was in good hands. Bollocks! Over the years, I gave and got more with the bike than he ever did in his silly prime. I made her mine.

I ended up calling her Mathilda, after the old song 'waltzing mathilda' since that phrase kept coming into my mind while turning the long bike around in tight spaces with mathematical calculations during three-pointers; even while wheeling it into a parking slot!
(That's her top-right of this page! and, and the small inset photo is Wiley Coyote (Y-bro)'s bike, a pure bred Yezdi 350cc by the name of Rob Roy. Look carefully - click on the pic- and you will also see my Bird rith behind!)

To be continued. (After all, What's Forever For?)


meanwhile,
All Text Copyright — ©Arunesh Dogra
Posted by arunesh by 25.4.07

Labels: Into the Sunset and Suchlike...(stories) 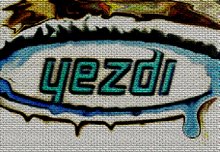 'is there something eluding you, sunshine?' 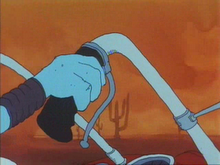